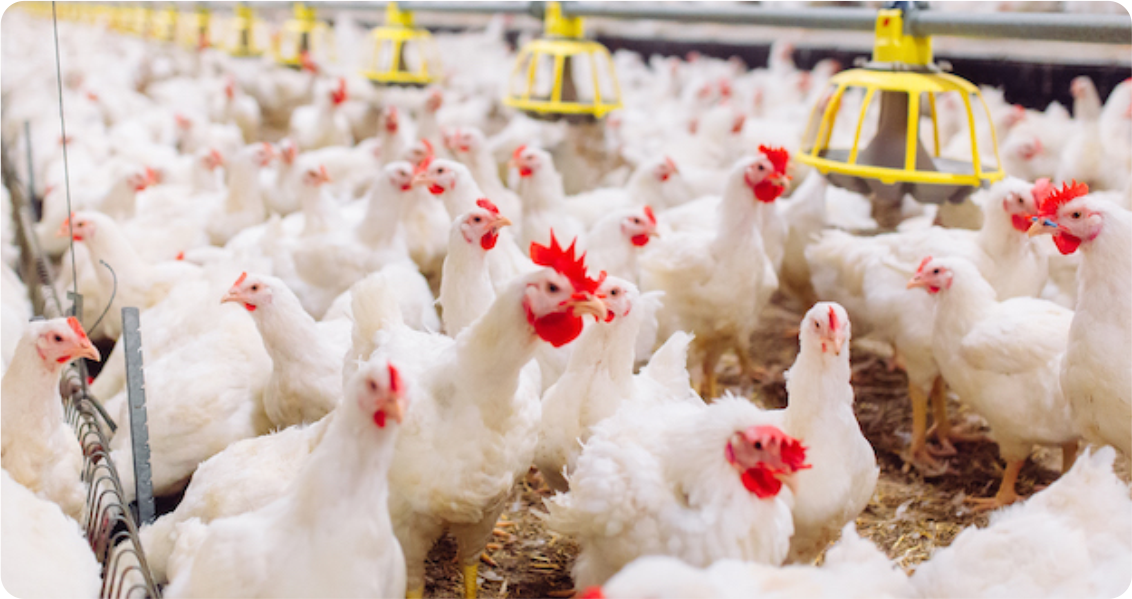 High levels of production and efficient feed conversion are the need of the modern livestock industry which to a certain extent could be achieved by using specific feed additives. Feed additives are of great interest in the poultry industry due to their property to promote growth and performance. Common feed additives used in poultry diets include antibiotics, antioxidants, emulsifiers, binders, pH control agents and enzymes. Antibiotic feed additives as growth promoters have long been supplemented to poultry feed to stabilize the intestinal microbial flora, improve the general performances, and prevent some specific intestinal pathology. However, because of the growing concern over the transmission and proliferation of resistant bacteria via the food chain, the European Union (EU) in 2006 banned antibiotic growth promoters to be used as additives in animal nutrition.

Antibiotic growth promoters (AGPs) and antibiotic resistance are closely related, this compelled researchers to explore the utility of other non-therapeutic alternatives like enzymes, probiotics, prebiotics, herbs, essential oils, immunostimulants and organic acids as feed additives in poultry production. The focus of alternative strategies has been to prevent proliferation of pathogenic bacteria and modulation of indigenous bacteria so that the health, immune status, and performance are improved. Use of acidifiers in poultry feed unequivocally satisfy the required criteria.

Acidifiers in poultry feed which are natural growth promoters, are acids included in feeds to lower the pH of the feed, gut, and microbial cytoplasm thereby inhibiting the growth of pathogenic intestinal microflora. Acidifiers can be organic/inorganic acids or associated salts that are added to the poultry feed to exert their antimicrobial action both in the feed and in the GI-tract. Organic acids have been identified as best alternative to antibiotic growth promoters by optimising the pH of gut, increasing the digestibility of the several minerals and thus increasing the performance of poultry economically. 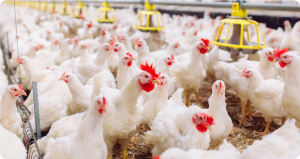 The term AGP is used to describe any medicine that destroys or inhibits bacteria and is administered at a low or subtherapeutic dose. The AGP are used to help the growing animal to digest their food more efficiently, get maximum benefit from it and allow them to develop into strong and healthy individual.

At least four mechanisms have been proposed as explanations of antibiotic mediated growth enhancement: 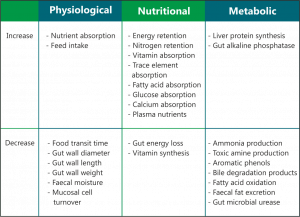 The curse of AGPs:

Organic Acids: An Alternate to AGPs:

Several alternatives have been proposed to replace AGPs, common alternatives applied in broiler diets are prebiotics, probiotics and organic acids. Organic acids are weak acids, which when used singularly or in combination, will kill pathogenic microbes, reduce the pH and acidify the gut. The protective matrix of these acids is determined by their pKa value. The pKa is the negative log of the acid dissociation constant or Ka value and used to indicate the strength of an acid. Lower the pKa value, stronger is the acid. That is, the lower value indicates the acid more fully dissociates in water. 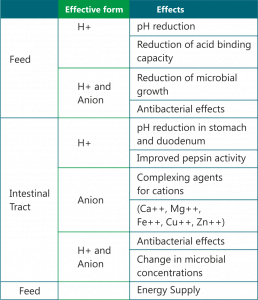 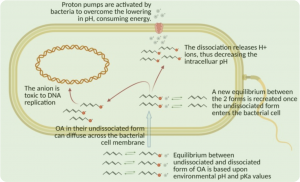 Organic Acid in the intestine:

Organic Acid are natural component of the GI environment. In broiler chickens, typical total SCFA concentrations have been reported to be in the range of 2-12 and 40-100 µmol/g digesta in the small intestine and caeca (Rehman et al., 2007).

Organic acid has a positive influence on intestinal morphology, as they increase the length of villi, so more absorptive surface area is for greater absorption of digesta.

It is said that major portion of immunity is in gut, the interaction of organic acid with gut microbiota positively influences the gut associated lymphoid tissue. It’s been observed that addition of organic acids in feed improves the resistance to pathogen, vaccine response/ protection and general health beyond the intestine.

The overall benefit of acidifiers in poultry is far greater in comparison to AGP, since the acids used are weak acid the safety margin during handling and consumption are also high. Keeping all the advantages of acidifier over AGPs, ACIPLEX was formulated.

ACIPLEX: ACIPLEX is an innovative acidifier in poultry based on synergistically combination of organic acids and their salts such as Fumaric acid, Citric acid, Calcium propionate, Sodium citrate & Sodium formate. is having non corrosive and non-stringent properties.

ACIPLEX components and their properties:

Effect of ACIPLEX on different microbes 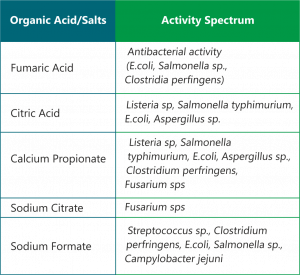 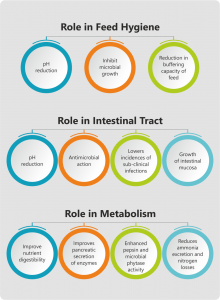 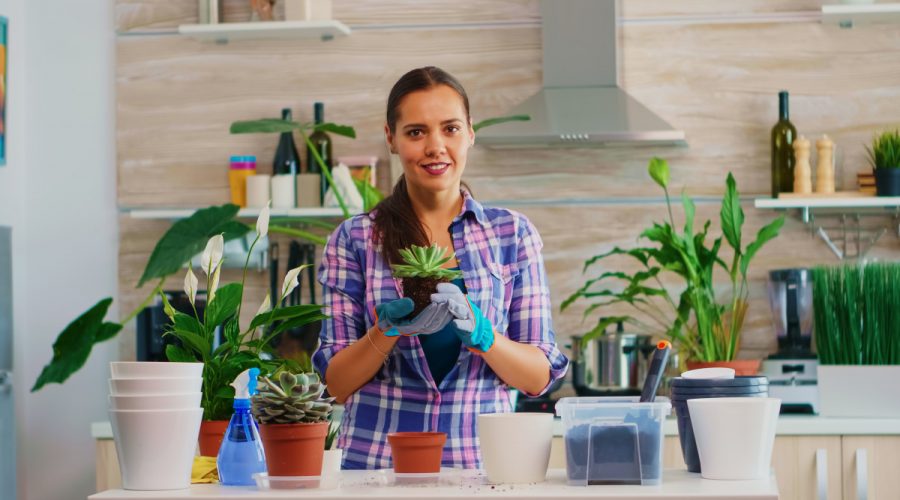 How To Keep Your Plants Healthy In Winter 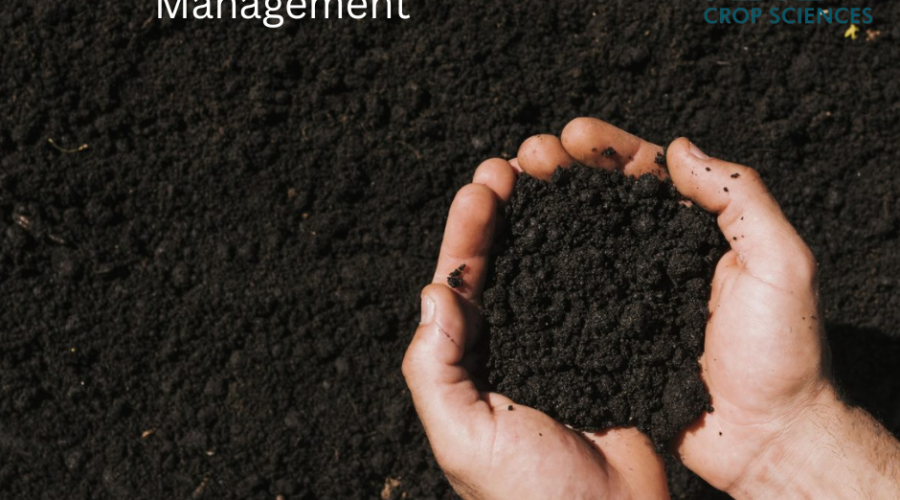